Quick update to show how everything's progressing. The fish tank is getting gross much faster than I anticipated, so I bought a $1 turkey baster to vacuum solids out of the bottom. Going to stick with that for a few days and see if it's manageable or if I will need to take more drastic measures. And I was worried Duchess wasn't going to produce enough fertilizer.... 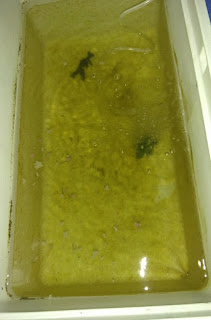 While still small, and still my only two, both my lolla rosa and blonde de paris have roughly doubled in size. I've put miss lolly there into the soil, which by the way has the most wonderful fluffy texture after a thorough mixing. 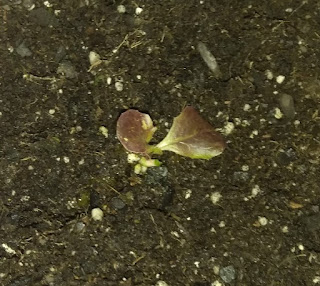 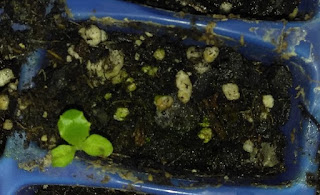 Finally, for giggles, I figured I'd take a picture with the grow light on so you can see the brightness. After checking on my garden my white apartment looks green for several minutes. 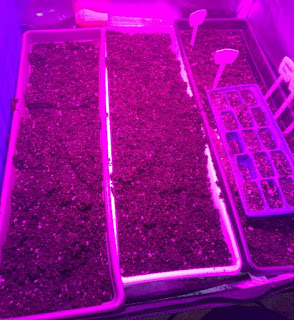 That's all I've got. It's only been four days so I don't know what exactly you hoped for.
Posted by H.Missy at 8:11 AM 1 comment:

So this is my current set up. Other than attempting to nurse some discount houseplants, it is unused.

It's a 2'x3'x3' mylar grow tent, probably fancier than I actually need but it's insulating, contains the sound and light, and was on sale. I also have a 300w light which is not turned on in the photo because it emits purple light. Again, probably better than needed, but I did not want to underestimate and have to purchase new lighting. Last time I used cheap bulbs and found them pointless. 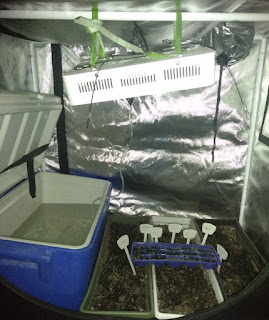 My planters are 24"x6" and filled with generic potting soil, coconut coir, and dead, dried out houseplants. They appear to have some sort of moss on them at the moment, so I'm allowing them to dry out. I'm assuming I can three plants in each, nine total, but we'll see how things play out. The tiny planter is an ice cube tray, as I couldn't be bothered to put on pants and buy proper starter trays, and is filled with the same mix as the planter boxes. 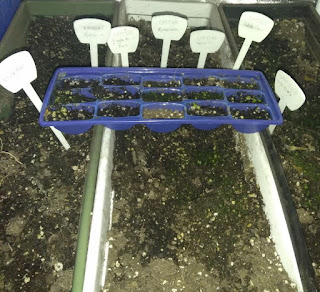 So far only two have sprouted, which is fine since the packets said 7-12 days.
Here's a Lolla Rosa baby! 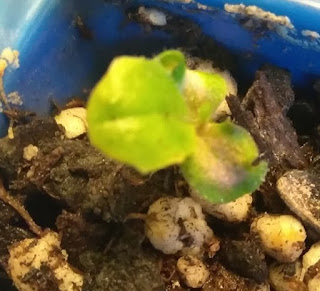 And a Blonde de Paris baby! 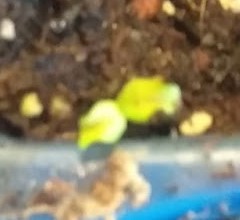 Okay, but I know you've been wondering what is up with the cooler. 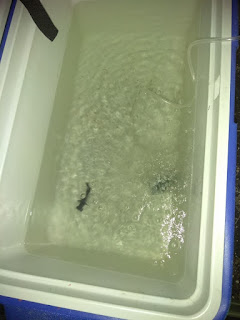 This is Duchess, a Carassius auratus auratus, aka Dragon Eye Goldfish. I house it (her maybe) in the cooler which holds about 14 gallons of filtered water, feed her, let her poop, and then feed the poop to my plants. Circle of life! Eventually I want to transition fully to an aquaponic system. For now I like the added security of traditional soil to act as a buffer, giving me time to correct any issues before plants start dying. Also, I didn't have the money for proper aquaponics equipment but already had soil. Goldfish are known for being tolerant of wild changes to their temperature and since I change out roughly 5% of the water daily it should be a healthy environment for her. I have plans to scale her up to a 40 gallon tank is she lives for a few years and gets a bit cramped, which is when I will transition to aquaponics.

I'm H. Missy, or HM. I have a dream of one day owning and operating a small farmstead that pays for itself, and find myself at this point in an apartment with no yard.

Sane people stop here, wisely acknowledging that a second floor apartment with small, poorly placed and insulated windows is no place for a garden. I am not sane.

This blog will cover not only my progress towards owning a homestead but also my adventures in gardening. I also like animals so, probably some of that too. Expect financial overviews, recipes, anecdotes, insanity, and tons and tons of crappy cell phone pictures.
Posted by H.Missy at 7:45 AM 1 comment: